Recap and Summary of the ILOA Galaxy Forum China 2017 on the themes Astronomy from the Moon and International Human Moon Missions. The main program took place 14:00-17:00 on Monday 5 June at the Beijing International Convention Center. Featured speakers confirmed to date include Andy Aldrin representing Buzz Aldrin’s Sharespace Foundation, Steve Durst of International Lunar Observatory Association, Wang Jing of the Lunar Ultra-Violet Telescope program at National Astronomical Observatories of China, Christian Lange of Canadian Space Agency and Dr.Guo Linli of the Institute of Manned Space System Engineering at China Academy of Space Technology, Hakim Malasan of Bosscha Observatory at Institute of Technology Bandung. The International Lunar Observatory effort to establish an observatory on the surface of the Moon is being conducted with support from spacecraft provider Moon Express of Cape Canaveral Florida, USA, and primary instrument contractor Canadensys Aerospace of Ontario, Canada, as well as National Astronomical Observatories of China, India Space Research Organization, the newly formed Southeast Asia Principal Operating Partnership, and others. ILOA sponsors Galaxy Forums around the world to advance Galaxy 21st Century science, education, enterprise in every class. There have been 75 Galaxy Forums, with over 300 presentations, held in 26 locations worldwide including: Hawaii, Silicon Valley, Canada, China, India, Southeast Asia, Japan, Europe, Africa, Chile, Brazil, Kansas and New York. Partner organizations in each of these location are being engaged to provide Scientific and Educational endorsements to enable fundraising for the mission. 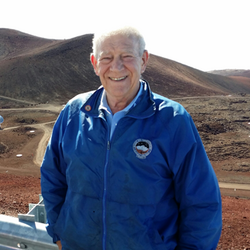