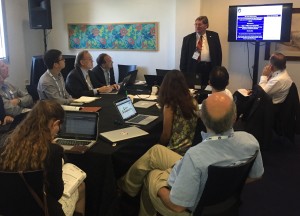 The purpose of this Committee is to encourage the international collaboration among academic structures involved in space activities, including technical and non-technical universities, etc., and in particular all players such as administration and management (President and Deans), professors, students, PhD and researchers.

The Committee is building an international network of Space Universities aiming at:

IAF-SUAC is composed of representatives from member universities of the IAF.

Symposiums/sessions and events at the iac

The Committee is planning to organise a technical session on University Satellites (title TBC) in cooperation with the Space Education and Outreach Committee (SEOC), to be held for the first time during IAC 2013 in Beijing, China.

Technical meetings or events outside of the iac

International Meeting of Presidents of Space Universities The IAF and the Committee organised two meeting where the Presidents and Deans of the world’s major space universities gathered to:

This meeting was first held during the IAC 2009 in Daejeon, South Korea, the second in Paris during the Spring Meetings in March 2012.

International CubeSat Workshop The IAF and the Committee organise a yearly workshop to gather the international CubeSat community to discuss the latest developments, address national needs, foster international collaboration to undertake new space missions and to share best practices and design recommendations that would protect the long-term sustainability of the space environment. The first was hold in Cape Town, South Africa in 2009 and the next meeting is foreseen for the week before IAC 2013 in Beijing, China.

Studies undertaken by the committee

This Committee has established several working groups to deal in a more effective manner with the different studies undertaken by the Committee:

This working group looks into ways of using the IAF network to facilitate access to launch opportunities for small satellites with an educational or humanitarian mission, as well as access to research facilities for student projects based on international cooperation.

The objective of this working group is to define the interfaces that would allow university missions to cooperate in orbit, to encourage such cooperation and to propose new distributed missions.

The Committee is defining the structure of a database of space-related educational and humanitarian projects, which would allow the identification of research opportunities open for international cooperation.