Hayabusa2 is a landmark asteroid sample return mission developed and implemented by the Japan Aerospace Exploration Agency (JAXA). It was launched on December 3, 2014 and arrived at a C-type near-Earth asteroid 162173 Ryugu in June 2018 after 3.5 years of the ion engine powered cruise. During the ensuing 1.5 years of its challenging asteroid proximity operation, Hayabusa2 successfully deployed four mobile rovers on the surface of the asteroid, achieved two high precision landings for sample collection from two different sites, and successfully conducted a kinetic impact operation to create a large artificial crater for subsurface material and structural investigations. Hayabusa2 successfully returned to Earth on December 6, 2020 after completing a round-trip journey of around 5.2 billion km in six years. The mission successfully brought as much as 5.4 grams of sample of Ryugu to Earth.

The Hayabusa2 has greatly contributed to the advancement of robotic interplanetary sample return missions through a series of flawless operational accomplishments made possible by its sophisticated technologies concerning solar-electric-propulsion cruising, landing, roving, impacting, and returning to Earth. Hayabusa2 has achieved the world’s second-ever successful round-trip flight to a celestial body beyond the Moon, following the former Hayabusa mission. It has also accomplished the world’s first in collecting samples from a C-type asteroid, which is expected to greatly contribute to the progress of planetary science.

The Hayabusa2 team consists of hundreds of experts including engineering staff from JAXA, international scientists from around the world, and young professionals ranging from graduate students to post-doctoral researchers. 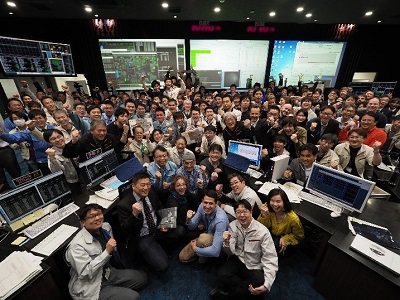 The team has been led by Dr. TSUDA Yuichi. He received his Ph.D. degree in aeronautics and astronautics from the University of Tokyo in 2003 and joined JAXA in the same year as a research associate. He was a visiting scholar at the Dept. of Aerospace Engineering, the University of Michigan as well as the Dept. of Aerospace Engineering Sciences, the University of Colorado Boulder in 2008-2009. After serving as a deputy lead for the IKAROS project, the world’s first interplanetary solar sail mission, Tsuda became the Hayabusa2 project manager in 2015, being the youngest project manager in JAXA’s history. His research interests are astrodynamics, spacecraft system, and deep space exploration.