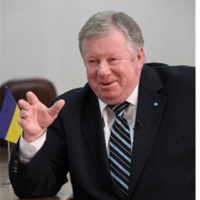 Alexander Degtyarev was born in October 31, 1951 in the city of Yaransk (Kirov region, Russia). He was married, had a son and a daughter. Graduated from Leningrad Mechanical Institute, speciality - Engines of space vehicles (1975) and Faculty of Economics of Dniepropetrovsk State University (2001).

Alexander Degtyarev had been working for Yuzhnoye State Design Office since 1975:

During 40-year career at Yuzhnoye SDO Dr. Degtyarev designed and led the development, as well as the business leadership of numerous major space and launch vehicle projects of global significance. The projects such as Sea Launch, Land Launch, Dnepr, Cyclone, Antares and Vega were implemented under his leadership and international cooperation guidance. Also Dr. Degtyarev managed satellite projects such as Okean, Sich, Egyptsat, and other space systems.

In the early 1990s Alexander Degtyarev initiated and organized the establishment of Marketing and Commercial Affairs Division at Yuzhnoye SDO that was managed personally by him in order to ensure the global presence of the company’s products in the world market. This policy was critical in achieving a new level of the company development after the collapse of the USSR, as well as it continues to fully foster the development of cooperative arrangements and promotion of Yuzhnoye’s technical developments on practically every continent. Alexander Degtyarev personally made a contribution to the organization of international economic activities of the company, establishment of international Joint Ventures with participation of Yuzhnoye SDO to provide launch and telecommunication services, including: Sea Launch Company, Land Launch Company, International Space Company Kosmotras, “Alcantara Cyclone Space” Binational Company, Space International Services, Elsacom and others.

Under his supervision the partnership were established, contracts and agreements were signed with the leading aerospace companies and organizations of the USA, Canada, Europe, Japan, the Republic of Korea, Egypt, Brazil and other countries. Alexander Degtyarev was a consistent advocate of expanding of the international cooperation among the aerospace companies and strengthening the Ukrainian companies cooperation. Currently, Yuzhnoye SDO managed by Alexander Degtyarev was engaged actively in the implementation of Cyclone-4M, Antares, and VEGA projects.

In order to make the products competitive and reduce their cost the new design approaches, novel materials and technologies of rocketry structural elements manufacturing based on new materials are being mastered under the guidance of Alexander Degtyarev, including innovative types of welding, rotary drawing and rolling methods for manufacturing of metal parts and assemblies, highly-precise technological equipment for manufacturing of the products made of non-metal composite materials by method of impregnating and winding, etc.

Dr. Degtyarev was also the Secretary of the Ukrainian regional division of the International Academy of Astronautics while leading several study groups.

He was an active supporter of scientific researches and postgraduate training at Dnipro National University, which is generally rated as one of the best aerospace universities in the country, Kharkiv Aviation Institute National Technical University, and others. Alexander Degtyarev established close contacts between Yuzhnoye SDO and 30 specialized technical universities of Ukraine, as well as with the National Academy of Sciences of Ukraine and 45 research institutions.

Dr. Degtyarev's main accomplishment was the establishment and development of systematic cooperation between Ukraine and aerospace companies in the United States, Canada, Europe, Asian-Pacific region. Under the leadership of Dr. Degtyarev Yuzhnoye SDO established steady partnership in aerospace domain. This fully contributed to the development of space science and emerging technologies of rocketry designing and manufacturing. The range of 40-to-1000-ton-thrust liquid propellant rocket engines with oxygen-rich staged combustion is also being implemented and the activities on its introduction into international industrial cooperation are being carried out under his direct supervision. The family of launch vehicles of from superlight up to heavy class is also being actively implemented at Yuzhnoye SDO in order to meet the international challenges related to near space and the Solar System colonization. Dr. Degtyarev became one of the first initiators and active leader of the industrial-and-research Lunar Base establishment.

In recent years, Yuzhnoye SDO under the leadership of Alexander Degtyarev has engaged about 100 Ukrainian enterprises, which is equivalent to approximately 20,000 workplaces. This was achieved, first of all, by successful performance of contracts with the foreign partners.

Awarded over 20 medals of the Federation of Cosmonautics of the USSR, Russia, Ukraine and other authorities and bodies in the rocket-space domain.