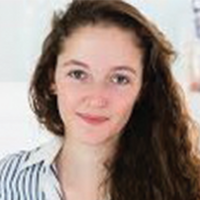 Ariel Ekblaw is the founder and lead of the MIT Media Lab’s Space Exploration Initiative, a team of over 50 graduate students, faculty, and staff actively prototyping our Sci-Fi space future across 40+ in house research projects. For the Initiative, Ariel coordinates space research and launch opportunities across the spectrum of science, engineering, art, and design, and builds collaborations on this work with MIT and Space Industry partners. Ariel is simultaneously a graduate research assistant at the MIT Media Lab, where she is completing a PhD in Aerospace Structures in Dr. Joseph Paradiso’s Responsive Environments group. Her current research includes designing, testing and deploying self-assembling space architecture, as future habitats for space tourists and science missions in orbit around the Earth and Mars. Ariel brings an interdisciplinary approach to her research at the Media Lab, with undergraduate degrees in Physics, Mathematics and Philosophy from Yale University and a master’s in blockchain research from MIT. Her past work experience includes blockchain product development, cloud computing analytics at Microsoft Azure, big data programming at the CERN Particle Physics Laboratory, microgravity research with NASA, and Mars2020 rover hardware systems engineering at NASA’s Jet Propulsion Laboratory. Ariel’s work has been featured in AIAA, IEEE, WIRED, Ars Technica, MIT Technology Review, Harvard Business Review, The Wall Street Journal, PRI’s ScienceFriday, CNN, the BBC, and more. Previously, in the Viral Communications group at the Media Lab, Ariel researched and prototyped technologies that “scale with user inventiveness”. Her projects explored digital currencies, applications for blockchain (Bitcoin’s cryptographic protocol), and decentralized networks.