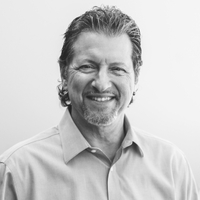 Brent Sherwood is the Senior Vice President, Advanced Development Programs for Blue Origin, a private space company building the foundation for millions of people living and working in space. He is responsible for the development of in-space systems and services for human space flight, space cargo, and space infrastructure that collectively will open space to human expansion. He reports to Blue Origin CEO Bob Smith.

Brent came to Blue Origin from JPL, where he was the founding manager of the JPL Innovation Foundry and later the Program Manager for Solar System Mission Formulation. In those roles he respectively led the integration of JPL’s mission formulation and competitive proposal operations, and the strategic pursuit of Discovery missions, New Frontiers missions, unsolicited planetary missions, and future planetary flagship missions.

A space architect, has published over 60 papers on the exploration and development of space, edited Out of This World: The New Field of Space Architecture, served as chair of the AIAA Space Architecture Technical Committee in 2018-2020 and on the board of the American Astronautical Society in 2018-2019, and is the 2021 recipient of the Columbia Medal from the American Society of Civil Engineers.