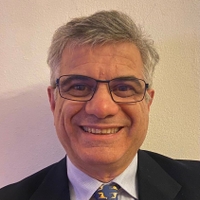 Carlo Mirra is an entrepreneurial senior executive with more than 30 years’ experience in the international space field. Currently, he is Sales Director in the Institutional Business Growth division of Airbus Defence and Space.

Mr Mirra holds an aerospace engineering degree at the University of Naples (MSc), followed by a post graduation specialization in re-entry aerodynamics at the von Karman Institute in Brussels, Belgium.

He has managed European space operations in several ESA missions with NASA and Roscosmos for almost 10 years.

Before that, Mr Mirra was Infrastructure, Sales and Services Director at Intospace and SpaceHab. In this capacity he was responsible for European commercial sales of SpaceHab services . In his earlier career days, Mr Mirra worked at the MARS Center in Naples where he soon became responsible for the setup of the Italian User Support Center for ISS operations.

Mr. Mirra is very engaged in voluntary activities both with aerospace professionals organizations and young generation coaching and mentorship via ISU, TU Delft and the University of Naples.

His IAF career begun in 1989. Since then he contributed to the activities of the Publication (Acta Astronautica), Space Education and Space Operations Committees. He chaired the Human Space Flight Committee. He is currently member of the IPC-Steering Group and chair of the Industrial Relations Committee.

He was the recipient of several ISS mission awards, author of more than 50 papers, flew almost 200 parabolas and ranked 4th in the 1998 ESA/ASI astronaut selection.