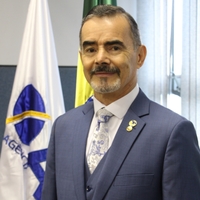 Born in São Paulo, Brazil, in 1957, Carlos Augusto Teixeira de Moura is graduated in Aeronautical Infrastructure Engineering (1980) and has a Master degree in Sciences (1996), both by Instituto Tecnológico da Aeronáutica (ITA).

From 1973 to 2008, he made a career in the Brazilian Air Force (FAB), leaving FAB as Colonel Engineer. He has been working in the space segment since 1985, mainly with implementation of the Alcântara Launch Center (CLA); development of the Satellite Launcher Vehicle (VLS); space launch and tracking operations (CLA); intercomparison of probes with the World Meteorological Organization; development of the Master Plan for the Alcântara Space Center (CEA); design and implementation of the Cyclone-4 Terrestrial Complex; design and planning of space systems within the Strategic Space Systems Program (PESE).

He also worked in the private sector from 2008 to 2016. After returning to the public sector in 2016, he worked in Science, Technology, Innovation and Offset of the Aeronautical General Staff until 2018. In 2018, he worked as an Analyst of the Space Systems Coordination and Implementation Committee – CCISE, in charge of PESE.

He has large experience in airport projects and space launch centers; development, qualification and operation of critically applied computer systems; preparation and spatial launching operations in Brazil and abroad; activities of elaboration and revision of public policies and of technological and organizational planning, including international cooperation; implementation and monitoring of quality assurance systems; development of standards for the aerospace industry; spatial certification; strategic planning of the aerospace sector.

Since 2005, he is the South American Representative of the International Association for the Advancement of Space Safety.

He is currently the President of the Brazilian Space Agency.