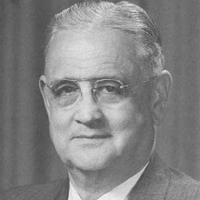 In 1922, Charles Stark Draper graduated from Stanford University with a Bachelor of Arts degree in psychology, and became a student at the Massachusetts Institute of Technology (MIT). Thus began a career as both teacher of aeronautics and astronautics and innovator in navigational guidance systems.

In 1926, as a second lieutenant in the U.S. Army Air Corps, his interest in blind-flying instrumentation led to the development of a wide range of instruments and systems for sea, air and space navigation. In 1929, he became a research assistant at MIT, and ten years later, in 1939, professor and head of the Department of Aeronautics and Astronautics. The same year, he was made director of the MIT Instrumentation Laboratory, Inc.

Drapers’s work in astronautics included the design and development of the inertial navigation guidance system that carried people safely to the Moon and back. His concepts in gyroscopic and inertial guidance and his abilities as teacher and mentor have inspired generations of scientists, engineers, and technicians working at the Laboratory.

Draper was a consulting engineer for aeronautical companies and instrument manufacturers and held patents for measuring and control equipment. He was a member of various scientific advisory groups, and received high honours and awards in the USA and abroad.

The 1977 he received the Allan D. Emil Memorial Award for International Cooperation in Astronautics. It was awarded in recognition of his outstanding scientific contribution as a pioneer in the development of navigational devices used for distant space missions – including the first trips to the moon – and his stimulating leadership and vision regarding the advance of human relations as a result of continuing progress in space exploration.

The Award was presented by Arthur D. Emil and Marcel Barrère, IAF President (1976-8) at the 28th International Astronautical Congress in Prague, former Czechoslovakia in September 1977.