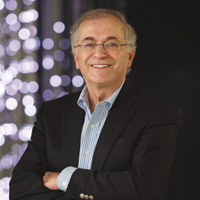 Charles Elachi has been the Director of the Jet Propulsion Laboratory since May, 2001. Professor of Electrical Engineering and Planetary Science at Caltech. Dr. Elachi received his B.Sc. (’68) in physics from University of Grenoble, France; the Dipl. Ing. (’68) in engineering from the Polytechnic Institute, Grenoble, and both a M.Sc. (’69) and Ph.D. (’71) degree in electrical sciences from the California Institute of Technology. He also has a M.Sc. (‘83) degree in geology from the University of California, Los Angeles, and an MBA (’79) from the University of Southern California.

Dr. Elachi joined JPL in 1970. Prior to becoming Director, Dr. Elachi was JPL’s Director for Space and Earth Science Programs (beginning in 1982) where he was responsible for the development of numerous flight missions and instruments for Earth observation, planetary exploration and astrophysics.

He has been a principal investigator on a number of NASA-sponsored studies and flight projects including the Shuttle Imaging Radar series (Science Team Leader), the Magellan Imaging Radar (Team Member), and the Cassini Titan Radar (Team Leader). He is the author of over 230 publications in the fields of active microwave remote sensing and electromagnetic theory, and he holds several patents in those fields.