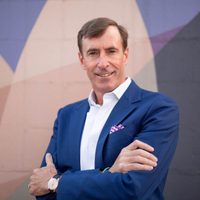 Clay Mowry has worked for over 25 years in the commercial launch and satellite sectors serving in government, as the leader of an industry trade association and as a senior executive for leading space companies.

He previously served for five years as Vice President for Global Sales at Blue Origin. His mission was to provide commercial and government customers with safe and affordable commercial space transportation services with the reusable New Glenn orbital and New Shepard suborbital launch vehicles.

Mr. Mowry worked for 15 years as the President and Chairman of Arianespace, Inc. As the head of the Arianespace’s U.S. subsidiary, he was responsible for managing the company’s sales, marketing, strategy, government relations and communications activities.

Clay Mowry received a Master of Business of Administration from Georgetown University in Washington, D.C., and a Bachelor of Arts in politics and government from Ohio Wesleyan University in Delaware, Ohio.

Mr. Mowry has served for over two decades as an IAF volunteer. Prior to assuming the Federation Presidency, he was a Special Advisor to the IAF President, Chair of the Industry Relations Committee, and Vice President for Finance. He also led the IAC Evolution Project to update and improve the Federation’s flagship annual global conference. He served previously on the IAF Honours & Awards Committee, Entrepreneurship & Investment Committee, as an IAF Launchpad Mentor, and as a rapporteur for technical sessions.

He currently serves on the Via Satellite Advisory Board, on the Karman Project Selection Board, as a Brooke Owens Fellowship Mentor, as a Creative Destruction Lab Mentor, and on the Space Generation Advisory Council Honorary Board. Mr. Mowry is also the founder and Chairman Emeritus of the Future Space Leaders Foundation, a non-profit organization dedicated to the career development of next generation space and satellite industry professionals.