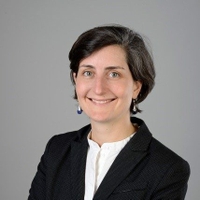 Emmanuelle David is the executive manager of the EPFL Space Center. The EPFL Space Center (eSpace) is an interdisciplinary unit responsible for the federation of space activities at the school and leads a research initiative on sustainable space logistics. Emmanuelle has 10 years’ experience in space transportation in academia, agency and industry from pre-development projects up to launch operations. She holds Space Engineering degrees both from the University of Technology of Compiegne, France, and the Technical University of Braunschweig, Germany.

Emmanuelle David started her career as Young Graduate Trainee at the European Space Agency Office in Washington DC in 2010-2011, where she performed a study on the commercialization of space transportation for cargo and crew in the US. Then she worked as a system engineer in launchers for the German Aerospace Center (DLR). She participated in system studies for future launchers and focused her work on the end-of-life of rocket upper stages. In April 2014, she was seconded from DLR to the Ariane 5 Midlife-Evolution Integrated Team at the European Space Agency (ESA), and to the Ariane 6 Project Team. As a system engineer, her role was to manage the launch system interface with the payload from the definition of the customers need, to the elaboration of technical requirements and definition of operational concepts. From 2017 to 2020, Emmanuelle pursued her passion for rockets and worked in launch operations for RUAG Space. She was leading a team of 4 technicians to integrate the payload fairing into the Ariane 5 and VEGA launchers. When not in Kourou, she was working on future launchers such as Ariane 6, VEGA-C, Vulcan.

Emmanuelle has been an active member of SGAC, serving as National Point of Contact for France from 2014-2016 and being a project coordinator from 2010-2012. She also participated in the organization of several space generation congresses and space generation fusion forums.