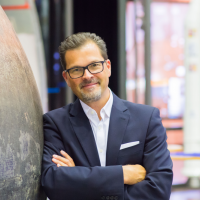 Mr Frank M. Salzgeber is the Head of the Technology Transfer Programme Office at the European Space Agency (ESA).

Prior this post he was the Head of Commercial Development in the European Astronaut Department of the Directorate of Human Spaceflight Microgravity and Exploration at the European Space Agency.

Prior to joining ESA, Frank held the position of Chief Operating Officer (COO and CFO) at an IT start-­‐up headquartered in Munich, Germany, between 2000 and 2003, which he merged with CANCOM SA.

Frank also spent seven years at Apple Computer (1993 – 2000) initially as an account manager and then as a sales manager, covering Central Europe and being positioned in the US and Czech Republic.

Being genuinely passionate about the importance of human space flight and the European Space Programme, Frank believes that ‘a society that stops exploring stops progressing’.

Frank is a member of the advisory board of the Triangle Venture Capital Group, the board of directors of European Business Network (EBN) and was founding chairman of the EIROforum (CERN, EFDA-­‐JET, EMBL, ESA, ESO, ESRF, European XFEL and ILL) working group on Innovation management and knowledge /technology transfer.

Frank holds a degree in Industrial Engineering, is married, has two sons and lives in the Netherlands and Bavaria.

The main mission of the Technology Transfer Programme Office, is to inspire and facilitate the use of space technology, systems and know-­‐how for non-­‐space applications.

The office aims to strengthen the European competitiveness, and plays an important role in enhancing the capabilities and of the European industry, while broadening its business horizons and creating jobs for its citizens.

In his role, Frank supported over 300 interdisciplinary technology transfers and initiated over 300 new start-­‐ups in the last 7 years through the ESA BIC Programme. This successful framework has been adopted by CERN, Fraunhofer and Airbus Defence and Space.

This year his team has supported and will continue to power 100 new start-­‐ups yearly through the international network of 13 ESA Business Incubation Centres across Europe.