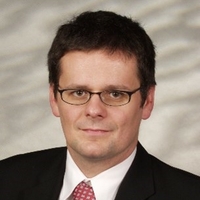 PD Dr. Georg Herdrich has a diploma and a doctorate in aerospace engineering from the University of Stuttgart. At IRS, he is responsible for atmospheric entry and electric space propulsion. He has participated in international pro¬jects as the re-entry capsule MIRKA (flown 1997), tempera¬ture measure¬ment system for the Japanese HOPE-X (JAXA, Ka¬wasaki), and de¬velop¬ment, qualification and integration of the measurement system PYREX-KAT38 for X38 (NASA, ESA, DLR). He was PI for the aero¬thermo¬dy¬na¬mic in¬strument¬ations PYREX, PHLUX and RESPECT for the ESA capsule EXPERT, and one of the principle investigators of the ATV “Jules Vernes” air¬borne observation campaign. Since 2020 he has been participating in the GreenCube Satellite project by the University of Rome for which his team has de¬veloped a clustered version of the PETRUS PPT (supported by ESA, ASI). The launch is planned for June 2022 making use of the VEGA-C launcher. The 100 kW applied field MPD thruster SX3 serves as reference for the start-up Neutron Star Systems. He is one of the work package leaders in the FET Open DISCOVERER, where his team develops an Atmosphere Breathing Electric Propulsion (ABEP) system for VLEO platforms. Since 2020 the FET open “MEEST” is engaged aiming at the development of MHD-systems enabling the magnetic influence to weakly ionized plasmas e.g. for the purpose of heat flux mitigation for spacecraft that enter into an atmosphere (European consortium, 10 members). Herdrich routinely cooperates with scientists in the USA, France, Italy, Japan and Russia. He has more than 300 conference papers to his name and more than 100 con¬tributions in reviewed journals and books. At IRS, he covers lectures as “Unconventional Propulsion Systems”, “Plasma Technology for industrial Applications”, “Re-Entry Technology”, and “Electric propulsion.” Since 2007, he has also served as a visiting assoc. prof. for plasma technology and atmospheric entry technology at U. of Tokyo, Graduate School of Frontier Sciences, Department of Advanced Energy and since 2010 he has been serving as Adj. Assoc. Professor at Baylor University, Texas, USA. Herdrich's awards include NESC (NASA Engineering and Safety Centre), NASA Group Achieve¬ment Awards, Stardust Hypervelocity Entry Ob¬serv¬ing Campaign and, later again, for contributions to the observation of the Hayabusa entry, and the Du Pont Plunkett Award (with Dr. A. Nawaz, NASA Ames, and Dipl.-Chem. M. Schlipf, Elring¬Klinger GmbH) for the development of a Teflon® helix propellant feeding system for the PPT ADD-SIMPLEX. He is a foundation member and serves as chairman of the “International iMPD/PPT Working Group“. Herdrich participates in several boards and working groups. He is active in the Aerothermodynamic Technical Committee of CEAS (Council of European Aerospace Societies) and between 2006 and 2012 as well as from 2021 he has been serving and is serving again as a delegate of the Federal Republic of Germany in the United Nation’s working group, “Nuclear Power in Space” and of the Joint Expert Group of United Nations and IAEA. He participated in the development of the United Nations safety framework for nuclear power in space. Between 2010 and 2014 he was the European lead for RTO task group, “Gas-surface-interaction.” Herdrich serves as reviewer for various scientific journals and, in addition, as editor (e.g. CEAS Space Journal). In 2012 he obtained his habilitation in the field of space relevant plasmas and is the head of the section Plasma Wind Tunnels and Electric Propulsion.