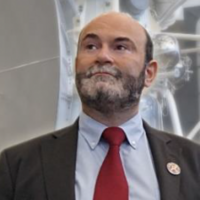 Pre-eminent space personality of Cyprus who has dedicated his life, promoting space research, innovation, cooperation and entrepreneurship in Cyprus and around the world.

As Vice-Chair of COSPAR's Panel on Innovative Solutions (PoIS) he currently leads the effort to utilise artificial intelligence in analysing space weather data, to enhance space weather modelling and potentially contribute to the understanding of climate change.

He led the national campaign that saw Cyprus join the European Space Agency (ESA), as a PECS Member. He also led the accession of Cyprus (via CSEO) to the Committee on Space Research (COSPAR), the International Astronomical Union (IAU), the International Astronautical Federation (IAF), the Copernicus Academy Network of the EU Commission, the Moon Village Association (MVA), and Mars Society.

Chaired many international groups, panels, summits, and symposia, that facilitated international space collaboration and diplomacy. Brokered international agreements, such as the high-level international agreement to consolidate global scientific efforts relating to Mars space-missions and atmospheric data, selecting Nicosia as permanent base for the Mars Upper Atmosphere Network (MUAN). Chaired the First Online Global Moon Village Workshop and Symposium, that facilitated international space diplomacy leading to the creation of the Global Experts Group on Sustainable Lunar Activities (GEGSLA), encompassing the participation of all major space faring nations. As Chair of the Moon Analogues Working-Group, he brokered and announced at the 70th International Astronautical Congress (IAC) Washington-DC, the "International Moon Analogue Consortium".