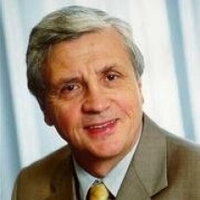 Gérard Brachet completed an engineering degree at the Ecole Nationale Supérieure d’Aéronautique in 1967 and a MSc in Aeronautics and Astronautics from the University of Washington in 1968. He began his professional career at the Centre National d’Etudes Spatiales (CNES) in France, and from 1972 to 1982 was successively Head of the Orbit Determination and Spacecraft Dynamics Department, the Scientific Programmes Division and the Application Programs Division.

During this period he helped prepare and implement several major space programmes, at the European level and internationally. In particular he was the French signatory for the international COSPAS-SARSAT programme for satellite-based search and rescue. He was also Chairman of ESA-PBEO where he helped define the ERS-1 and ERS-2 EO programmes.

Brachet was directly involved in defining and developing the French SPOT satellite programme in 1978 and led the set-up of the SPOT IMAGE company to market their earth observation images. In 1982 Brachet was appointed Chairman and Chief Executive Officer of SPOT IMAGE and remained in this position until 1994. At the same time he was an advisor on space matters to the European Commission, and in 1991-2 he helped formulate space policy for the European Union.

Brachet returned to CNES in 1994 where he was successively the Director for Programs, Planning and Industrial Policy, and Scientific Director and Director General from July 1997 to December 2003. He was also Chairman of the International Committee on Earth Observation Satellites (CEOS), which brings together 20 space agencies and 7 international organisations with the objective of coordinating Earth observation satellite programmes.

Since January 2004 he has been a highly respected aerospace consultant.

Brachet served as a Chairman of the United Nations Committee on the Peaceful Uses of Outer Space (COPUOS) from 2006 to 2007.

Brachet is a member of the International Astronautics Academy (IAA) and a corresponding member of the Academie Nationale de l’Air et de l’Espace (National Air and Space Academy).

Brachet served as IAF Vice-President for International Organisations Relations and Developing Countries from 2008 to 2012.