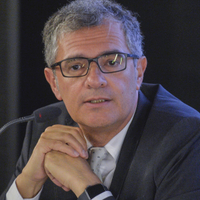 Giorgio Saccoccia, current President of the Italian Space Agency (ASI) since April 2019, has over thirty years of experience in the aerospace sector, mainly gained in the international arena.

Graduated with honors in Aeronautical Engineering with specialization in space at the University of Pisa on March 1988, he completed his studies with a Master in Business Administration at the European Headquarters in Leiden (NL) of the Webster University of St. Louis (USA) in 1995.

After three years of work in Italy, he joined the European Space Agency (ESA) in 1990 at the European Space Technology and Research Center (ESTEC) in the Netherlands, covering various positions over the years. From 2003 to March 2019 he was Head of the Propulsion and Aerothermodynamics Division, responsible for European Research and Development and for supporting projects in the propulsion sector for satellites and launchers, aerothermodynamics and, more in general, for the design of new vehicles for space transportation.

Under his presidency at ASI, the Italian space budget has more than tripled, allowing Italy to strongly strengthen its international positioning in the sector. Through a careful reorganization of the Agency, there has been an increase in ASI staff of about 30 percent.