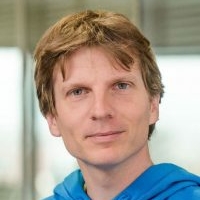 Born in 1980 in Slovenia, he studied Physics and co-founded Cosylab inc. at age 21, a company developing control systems for particle accelerators and large experiments in physics. In 2008 Grega moved to become CEO and co-founder of Sinergise, specialising in software for advanced geospatial applications, helping Europe to efficiently manage and control agriculture policy and introducing land administration systems to developing countries in Africa.

With his colleagues they have recognised the potential of open Copernicus earth observation data early but soon hit a wall trying to use existing technologies to work with these large datasets. Deciding to do something about it, Sentinel Hub was born. A Copernicus Masters award winning service for processing and distribution of satellite data is exploiting AWS Open Public Datasets.

After working with governmental clients in Balkan, Western Europe, Asia and Africa, Grega is now engulfed in building a global Internet business.

In 2015, while trying to serve established clients with newly available Sentinel-2 EO data, Sinergise’s team discovered, that the EO field is ready for disruption. There were so much satellite data openly available, but barely used. Its customers in Africa were struggling with lack of country-wide datasets yet there was a new Sentinel-2 image available every two weeks. Sinergise decided to facilitate its cloud GIS solution, Geopedia, one of the first crowd-sourcing GIS platforms, and build Sentinel Hub, award winning satellite imagery archiving, processing and distribution service. The success of the platform exceeded everybody’s expectations and is now powering several earth observation applications in Europe, Africa, US and Australia and at this moment processes two million requests per week, crunching more than quadrillion satellite imagery pixels from Sentinel, Landsat, Planet, RapidEye and other missions. Amongst its clients are both small start-ups as well as established companies such as Progis, Indra, Solenix, Intel and Claas. A newly established space business is growing fast enough to overtake the “old” one in a matter of a year.

Sinergise has a turnover of about 2 million EUR and employs 40 experts in Slovenia and Moldova.