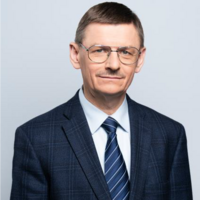 Professor Grzegorz Wrochna serves as the President of the Polish Space Agency (POLSA). He was appointed to this position on February 18, 2021.

Prof. Wrochna is a Professor of physics. From 1986 to 1991, he served on the Faculty of Physics, University of Warsaw. During that time, he worked closely with the European Organization for Nuclear Research (CERN) and the German Electron Synchrotron (DESY) labs, in Geneva and Hamburg, respectively. From 1991 to 1998, while at CERN, he participated in the design and construction of the Compact Muon Solenoid (CMS) experiment at the Large Hadron Collider (LHC).

Beginning in 1999, Prof. Wrochna served at the Institute for Nuclear Studies, and in 2006 became the director of the Institute, following his leadership of the Astroparticle Apparatus Laboratory. In 2011, he initiated the creation of the National Center for Nuclear Research (NCBJ), and he served as its Director until 2015. At NCBJ, among other achievements, he established the Department of Astroparticle Physics, and involved the institution in several space-related projects.

Prof. Wrochna represented Poland at EURATOM, the OECD Nuclear Energy Agency, and the Board of Governors of the European Union’s Joint Research Center. During 2017-2018, he served as the President of the Scientific Policy Committee advising the Minister of Science and Higher Education.

During 2019-2020, Prof. Wrochna served as Undersecretary of State in the Ministry of Science and Higher Education, where his responsibilities included overseeing cooperation with the European Commission and the European Space Agency (ESA).