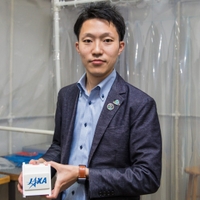 Mr. AKAGI Hiroki is a Deputy Director of Houston Office, the Japan Aerospace Exploration Agency (JAXA). Mr. Akagi is currently a member of the International Space Station (ISS) Mission Management Team and works for ISS mission operations and maximization of the ISS Utilization for all human benefits with international partners form United States, Russian, Europe and Canada. Mr. Akagi graduated from the Tokyo Institute of Technology and has worked in JAXA for 11 years, including his contributions to structural design and verification for spacecraft, mission integration/operations for ISS Programme, technical coordination for international cooperation and creation of business opportunities involving its space-related activities with private sector.

Mr, Akagi has an outstanding career as a young space leader in promoting the ISS and small satellite utilization to the world, in particular through the KiboCUBE programme. KiboCUBE is a collaboration between the United Nations Office for Outer Space Affairs (UNOOSA) and JAXA to deploy small satellites from Japanese Experiment Module “Kibo” on the ISS. As one of the founding members of KiboCUBE and JAXA lead engineer, Mr. Akagi played a key role in helping a number of emerging countries start their first satellite projects, deploying satellites of more than 20 countries under international cooperation with the UNOOSA and the strategic partners (Kyushu Institute of Technology, the University of Tokyo, Hokkaido University and Tohoku University), thereby promoting the achievement of the Sustainable Development Goals (SDGs).

As a young professional, Mr. Akagi has been actively engaged in the international space community. Mr. Akagi has actively participated in IAF workshops to share his knowledge and experience with emerging countries. Mr. Akagi has also attended the United Nations Committee on the Peaceful Uses of Outer Space (UN COPUOS), Asia-Pacific Regional Space Agency Forum (APRSAF) to discuss future space activities and international collaboration. In addition to these activities, Mr. Akagi has contributed to the University Space Engineering Consortium (UNISEC) to support the university’s space program.