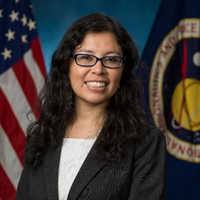 Jackelynne was born in Cusco, Peru. She earned two bachelor degrees from Rutgers University; one in Mechanical and Aerospace Engineering, and a second one in Spanish Translation and Interpretation. She earned a Certificate in Lean Six Sigma from the Lockheed Martin Greenbelt Program, and a Certificate in Engineering Management from Drexel University. Jackelynne obtained a Master’s Degree in Aeronautical Science with concentration in Human Factors Aviation/Aerospace Systems from Embry-Riddle Aeronautical University; and a second Master’s Degree in Aerospace Engineering with concentration in Space Systems Integration at Georgia Institute of Technology. Jackelynne is an alumna of the 2015 Space Studies Program from the International Space University.

Jackelynne works at NASA Johnson Space Center in the International Space Station Mission Planning Operations within the Flight Operations Directorate. She conducts research on crew autonomous scheduling aboard the ISS, and supports ground tests for Lunar Orbital Platform-Gateway. At JSC, she has worked in the aircraft operations division with the T-38 trainer aircraft primary flight displays, and in the human health and performance branch conducting human in the loop evaluations for Orion. Prior to JSC, she worked as Mechanical Engineer and Test Operator at NASA Jet Propulsion Laboratory on the Robotic Manipulators and Deployable Booms group performing verification and validation ground tests for the Mars Science Laboratory, Curiosity Rover mission. And ealier, Jackelynne worked for Lockheed Martin Space Systems Company as Antennas Mechanical Design Engineer and as a Systems Integration and Test Engineer for commercial and government satellite programs. Her research is on Human Systems Integration. She participated as Mission Specialist in the Human Exploration Research Analog mission, and as Executive Officer in the Mars Desert Research Station analog mission.

Jackelynne is the founder of the Centro de Ciencia, Liderazgo y Cultura, which brings topics of science, leadership and culture to the young generation at an international level. She is an active member of the American Institute of Aeronautics and Astronautics, Space Generation Advisory Council in support of the United Nations programme in space applications, and the International Astronautical Federation. She has served as chair for the habitability and human factors subcommittee of the Space Architecture Technical Committee, the AIAA Young Professionals Committee, and the IAF Workforce Development and Young Professionals Committee. She has many conference and journal publications. Jackelynne and her husband have a son and a daughter. She enjoys reading, traveling, dancing, and learning from different cultures. Her interests include human spaceflight, mission operations, space architecture, systems engineering, project management, STEM and STEAM initiatives.