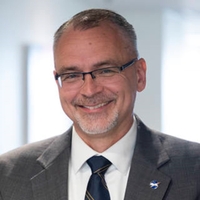 Jim Free is the Associate Administrator for the Exploration Development Systems Mission Directorate (ESDMD) at NASA Headquarters in Washington, D.C. Free is responsible for the development of NASA’s lunar and Mars architectures, defining and managing the systems development for NASA’s Artemis program and planning for NASA’s Moon to Mars exploration integrated approach. These activities include the human exploration system development for lunar orbital, lunar surface, and Mars exploration, leading the human aspects of the Artemis activities and the integration of science into the human system elements. Programs in ESDMD include Orion, Space Launch System, Exploration Ground Systems, Gateway, Human Landing System, and Extravehicular Activity (xEVA) and Human Surface Mobility.

Free is a formerly retired NASA civil servant who has spent the past few years in a variety of private sector roles including most recently chief operating officer and senior consultant for Lead Off the X. Prior to his work at Lead Off the X, he served as senior vice president of Aerospace Systems at Peerless Technologies.

He retired from NASA in 2017, most recently serving as the agency’s deputy associate administrator for technical for the Human Exploration and Operations Mission Directorate. He was responsible for assisting the associate administrator in providing strategic direction for all aspects of NASA’s human spaceflight exploration mission. In that role, Free provided cross-agency support functions of space communications and rockets, including direction for the operation and use of the International Space Station, development of the Space Launch System and Orion spacecraft, and direction for the commercial crew and cargo programs that provide logistics and crew transportation to the station.

Free began his NASA career in 1990 at the Goddard Space Flight Center, Greenbelt, Maryland, as a propulsion engineer and later as a systems engineer on several spacecraft. He served in a variety of positions at NASA’s Johnson Space Center in Houston and the agency’s Glenn Research Center in Ohio. Free worked on various projects and programs spanning everything from the International Space Station, electric actuation technologies to the Orion and Prometheus spacecrafts.

He went on to serve as deputy director before his appointment as the Glenn director, where he was responsible for planning, organizing, and directing the activities required in accomplishing the missions assigned to the center.

A native of Northeast Ohio, Free earned his bachelor's degree in aeronautics from Miami University in Oxford, Ohio, and his master's degree in space systems engineering from Delft University of Technology in the Netherlands.