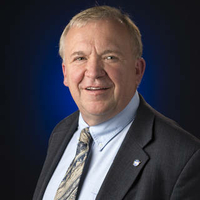 James L. Reuter was named NASA’s associate administrator for the Space Technology Mission Directorate (STMD) at NASA Headquarters in June 2019, a position in which he served in an acting capacity since February 2017. In this role, he provides executive leadership and management of the technology programs within STMD, with an annual investment value of $1.1 billion.

Reuter was the deputy associate administrator of STMD from February 2017-February 2018. Prior to this role, Reuter served as the senior executive for technical integration in the Center Director’s Office at NASA’s Marshall Space Flight Center from 2009-2015, providing strategic leadership on critical technology and integration activities. Additionally, Reuter served as the Exploration Systems Division (ESD) Standing Review Board chair, responsible for overseeing development activities of the Space Launch System, Orion Multi-Purpose Crew Vehicle, Ground Systems Development and Operations Programs, and the ESD integration activities.

Previously, Reuter served in many managerial roles at Marshall including Ares vehicle integration manager in the Constellation program, the deputy manager of Space Shuttle Propulsion Office, and the deputy manager of Space Shuttle External Tank Project Office during the shuttle return-to-flight activities. In 2002, he was assigned to a detail at NASA Headquarters as the deputy associate director in the Space Transportation Technology Division in the Office of Aerospace Technology. From 1994 to 2001, he was the Environmental Control and Life Support System manager for the International Space Station at NASA’s Johnson Space Center. Reuter began his NASA career in 1983 as an aerospace engineer in the Structures and Propulsion Laboratory in Marshall’s Science and Engineering Directorate.

Reuter has a bachelor’s degree in mechanical engineering from the University of Minnesota in Minneapolis. He has received numerous NASA awards and honors, including a 2019 Distinguished Service Medal, 2016 Outstanding Leadership Medal, 2013 NASA Exceptional Achievement Medal, a 2008 NASA Outstanding Leadership Medal, a 2002 NASA Exceptional Service Medal, a 1998 Silver Snoopy Award and a 1993 Space Station Award of Merit.