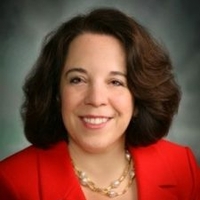 In 1996, Ms. Warren joined Lockheed Martin’s Space & Strategic Missiles Sector, and in 2001 she became part of LM’s Washington Operations as Senior Director, Trade & Regulatory Affairs. Prior to Lockheed Martin, Ms. Warren served in several senior roles at the U.S. Federal Communications Commission. Prior to joining the U.S. Government, Ms. Warren worked for the Commission of the European Union – both in Brussels, with a focus on EU-Japan and EU-U.S. issues, and in Washington, DC, with a focus on EU-U.S. trade.

Ms. Warren holds leadership positions in several professional and civic organizations. She serves on the Boards of the Satellite Industry Association and the U.S. ITU Association, and also on NAM’s Public Affairs Executive Committee. She is a co-chair of the Signers Circle of the Foundation of the National Archives & Records Administration (NARA), and serves on the Board of the Gadsby’s Tavern Museum Society in Old Town Alexandria, Virginia.