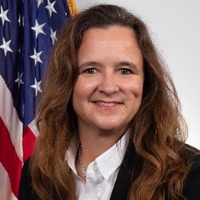 Prior to coming to NASA, Dr. St. Germain was the Deputy Assistant Administrator, Systems (DAAS), for NOAA’s Satellite and Information Service. She guided the ongoing development and deployment of NOAA’s two major satellite programs (the Joint Polar Satellite System and Geostationary Operational Environment Satellite – R series), the COSMIC-2 mission, and the Space Weather Follow-On. She also led the development of the next-generation capabilities that will replenish and augment these systems in the future.

Prior to becoming the DAAS, Dr. St. Germain served as the Director of the Office of Systems Architecture and Advanced Planning (OSAAP) where she led NOAA’s enterprise-level architecture development to define NOAA future spaceborne capabilities. Dr. St. Germain is a leader in enterprise-level planning and multi-organizational programs of national significance. She is also an expert in major systems acquisition, with particular proficiency in transitioning new technology into operational systems. Prior work for NOAA included leading all aspects of system performance during the development of the Suomi-NPP system, from 2006 to 2011.

From 2011 to 2016, Dr. St. Germain served in the Space, Strategic and Intelligence Systems (SSI) Office, Office of the Under Secretary of Defense for Acquisition, Technology and Logistics (OUSD AT&L). There, she led the DoD 2014 Strategic Portfolio Review for Space, a special assignment task for the Deputy Secretary of Defense to develop a strategy and implementation plan for adapting to evolving challenges in the space domain. Dr. St. Germain also led the Remote Sensing and Prompt Strike Division within SSI, where she was responsible for acquisition shaping and oversight of DoD strategic missile warning and space-based environmental monitoring portfolio.

Dr. St. Germain had a successful research career at the University of Massachusetts, the University of Nebraska, and the Naval Research Laboratory. She has performed research aboard ice-breakers in the Arctic and Antarctic, flown through hurricanes and tropical storms on NOAA’s P-3 airplanes and measured glacial ice on a snowmobile traverse of the Greenland ice sheet. She also led the modeling and calibration of the WindSat Coriolis mission, the first space-borne radiometer to measure ocean surface wind direction.