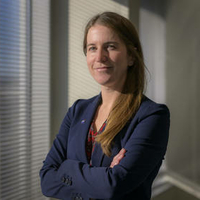 Calvin will serve in this capacity under the Intergovernmental Personnel Act Mobility Program, which provides for the temporary assignment of personnel between the federal government and state and local governments, colleges and universities, Indian tribal governments, federally funded research and development centers, and other eligible organizations.

Since 2008, Calvin has been an Earth scientist at the Pacific Northwest National Laboratory's Joint Global Change Research Institute (JGCRI) in College Park, Maryland. She worked in JGCRI's Global Change Analysis Model, a system for exploring and analyzing the relationships between human and Earth systems in the context of global climate change. She also worked on the Department of Energy’s Energy Exascale Earth System Model, a system for analyzing the past, present, and future state of the Earth system. Her research simulates the interaction between global resources, focusing on the impact of land, water, and energy use through an environmental and socioeconomic lens.

In her almost fourteen years at JGCRI, Calvin co-authored over 100 publications. Her recent publications have investigated growing populations against agriculture and water scarcity in the face of climate change.

Calvin served on a National Academy of Sciences research committee on models of the world, which was commissioned by the National Geospatial Intelligence Agency to create models for interrelated global systems such as economics, politics, and environment. She has contributed to the third U.S. National Climate Assessment as well as two special reports by the Intergovernmental Panel on Climate Change, with two more reports scheduled for publication in 2022. She also worked at the U.S. Energy Information Administration for two years as an international energy analyst.

Calvin received her doctorate in Management, Science, and Engineering from Stanford University and a bachelor of science in Computer Science and Mathematics from the University of Maryland.