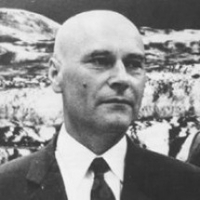 Born in 1914, Konstantin Davidovitch Bushuyev attended an industrial technical school and at the age of 16, began his career as a shop foreman in an aviation plant in Moscow. In 1936, at age 22, he entered the Sergei Ordzhonikidze Moscow Aviation Institute. He graduated in 1941 as an engineer-mechanic in aircraft design, and began work at the design office of B.F. Bolkhovitinov. Later, he was made deputy to academician and chief designer S.P. Korolev.

He gained his reputation as a rocketry and space technology designer and scientist through his work on applied dynamics and vehicle construction strength. He helped develop Soviet manned spacecraft, e.g. the orbital space station Salyut, and was also technical co-director of the Apollo-Soyuz Test Project. His extensive technological contributions to the peaceful uses of outer space included exploration of the Moon, Venus and Mars.

The 1978 Allan D. Emil Memorial Award for International Cooperation in Astronautics was jointly awarded to Konstantin Bushuyev and Glynn Lunney [link to Glynn Lunney], for their outstanding contribution to the technical and managerial supervision of the Apollo-Soyuz Test Project – the first international joint space manned effort in the world.

The Award was presented by Allen Cleveland, AIAA President, and Marcel Barrère, IAF President (1976-8), at the 29th Interntional Astronautical Congress in Dubrovnik, former Yugoslavia in October 1978.