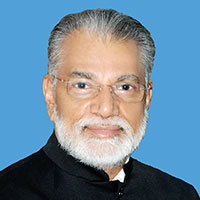 The winner of the 2014 Allan D. Emil Memorial Award is Dr. Koppillil Radhakrishnan. The Allan D. Emil Memorial Award is one of the most prestigious IAF awards, and since 1977 has been presented annually for an outstanding contribution to space science, space technology, space medicine or space law. This contribution either involved the participation of more than one nation or furthered the possibility of greater international cooperation in astronautics.

As the Chief of ISRO, Dr. Radhakrishnan has spearheaded “Team ISRO,” executing 31 space missions since Nov 2009, an unprecedented accomplishment in its history. In this endeavour, India’s space capabilities for satellite navigation, strategic communications, microwave radar imaging and tropical climate studies have been established and strengthened, in addition to ensuring continuity and capacity for operational space services. In addition to 10 consecutive successful PSLV missions during 2010-2014, the efforts towards a reliable GSLV with Indian Cryogenic Engine & Stage achieved a great success on January 5, 2014, a landmark in the technological progression of the country. Under his leadership, India’s first planetary exploration–the Mars Orbiter Mission–was conceived, planned and executed. A clear programmatic direction to the year 2020 has been strategized to focus India’s needs and aspirations in all areas of the Indian Space Programme.

His contributions over the last 43 years in the domain of space engineering and applications have strengthened India’s strategic capability in space, the technological development of the country and its people, while enhancing the stature of India in the international arena.