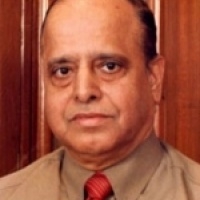 Dr. Krishnaswamy Kasturirangan took his Bachelor of Science with Honours and Master of Science degrees in Physics from Bombay University and received his Doctorate Degree in Experimental High Energy Astronomy in 1971 working at the Physical Research Laboratory, Ahmedabad. He is presently the Director of the National Institute of Advanced Studies (NIAS) at Bangalore, Honorary Professor of Physics, Physical Research Laborary, Ahmedabad and at the Jawarharlal Nehru Centre for Advanced Research at Bangalore.

For over 9 years until 2003, Dr. Kasturirangan steered the Indian Space programme as Chairman of the Indian Space Research Organisation. Under his leadership, the programme witnessed several major milestones including the successful launching and operationalisation of the India’s prestigious launch vehicles, the Polar Satellite Launch Vehicle and the Geosynchronous Satellite Launch Vehicle. Further, he also oversaw the development and launching of some of the world’s best civilian remote sensing satellites, IRS-1C and 1D, realization of new generation INSAT communication satellites, besides ocean observation satellites IRS-P3/P4. These efforts have put India as a pre-eminent space-faring nation among the handful of six countries that have major space programmes.

He has published more than 244 papers in the areas of astronomy, space science and applications, delivered 61 Convocation Addresses in various universities of the country and also is the recipient of Honorary Doctorate from 16 universities, including Banaras Hindu University, Anna University, IIT- Bombay, University of Calcutta, Indira Gandhi National Open University, Mysore University and SRM University. He delivered nearly 304 public and memorial lectures. More recently, he was one among the four global personalities and the only Asian to deliver a Keynote Address on ‘Potential of Space Technology to serve Humankind: coming 50 years’ at UNESCO Headquarters in Paris during the celebrations of the 50th Anniversary of the launch of Sputnik organized by International Astronautical Federation and UNESCO.