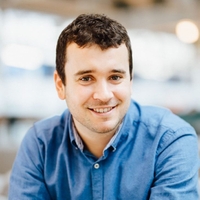 Luis Ferreira is a Strategist at Airbus driving the development of strategic plans for the decade ahead in the Space and Defence sectors. Luis is a strong NewSpace advocate and has worked for space since 2010 starting his career at the European Space Agency.

Luis has a Physics and space technology background complemented with business, engineering, operations, and management experiences. Luis has contributed to a handful of space missions and projects in different fields, such as: Earth science and climate monitoring missions, asteroid exploration probes, security and safety concepts, and last, but not least, lunar exploration. He proudly tested the camera onboard the European MASCOT lander that landed in 2018 on asteroid Ryugu after being released from its Japanese mothership, the Hayabusa-2 spacecraft.

Luis is an alumnus of the International Space University, a member of the IAF Earth Observation Committee and an engaged Space Generation Advisory Council member having held several roles in the organisation in the past. He is deeply involved in promoting and arousing interest for space activities among the wider public, and especially early career individuals and students.

Luis is curious and energetic with an immense drive to harness all the possibilities that space has to offer to humankind. He seeks purpose in all he does, and believes it is our destiny to open the frontier of space. He currently lives in Munich, Germany, and is a proud husband and father of a future female leader. Luis enjoys reading and learning from the intersection of technology, arts, politics and business strategy.