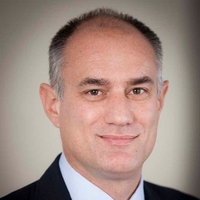 Marc is playing since almost thirty years with all elements of European launchers family – Ariane 1 to 5, Soyuz and Vega – both in launch vehicle and ground segments. Starting off as a test engineer, he has worked as system engineer, project manager, launch operation manager, head of production and programme manager.

In his current position he is in charge of developing new launchers programmes and business for the brand new Airbus Safran Launchers 50/50 joint venture, both in Europe and internationally. Arriving from Safran/Snecma just after a strong involvement in 2012 and 2014 European Space Councils preparations from French agency programme directorate, Marc alternatively worked for national agencies and European industries, living in locales as different as New Caledonia, Guiana, Normandy, Toulouse, Rome and Paris.

Following childhood in Africa, Marc became engineer from Institut Polytechnique, Grenoble in 1987, and complete the Master of Applied Mathematics, in Montpellier 1988.

A proud EU citizen, who lived on 5 continents, Marc is highly motivated by our global world empowerment and innovation opportunities.