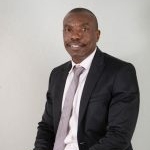 Mr. Mmboneni Muofhe is the Deputy Director-General (DDG) for Technology Innovation at the Department of Science and Technology in South Africa. He was previously DDG for International Cooperation and Resources and has held several positions at the Department, including being Chief Director: International Resources, Director: Strategic Partnerships and Director: Global Projects. During this period, he oversaw South Africa’s growing participation in EU Research Funding programmes, led the mobilization of Official Development Assistance funds to support South Africa science system and the Department’s partnership with Multinational Companies.

South Africa was nominated as Lead GEO Co-Chair for 2019. Assuming this role, Mr Muofhe will chair all Executive Committee meetings and oversee annual delivery on priorities. Under his guidance, in 2019 the GEO community will prioritise engagement with the Global South in building a results-orientated Global Earth Observation System of Systems (GEOSS), supporting global policy priorities through Earth observations and strengthening the sustainability of the GEO enterprise.

Mr Muofhe’s earlier working and post-graduate years were mainly in agricultural biotechnology. He was a UNESCO Biotechnology Fellow at the Agricultural Research Council in 1997 before joining the Foundation for Research Development (now National Research Foundation) as Coordinator and then Manager for Technology and Human Resource for Industry Programme (THRIP).