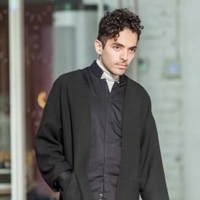 Nahum is a space artist, composer and multi-instrumentalist. He lives in London and Mexico City and works in the intersection of the arts and science. Nahum obtained an MA at Goldsmiths University of London, where he graduated with a distinction. His work revolves around topics in space sciences, whilst addressing their relationship to the fantastical and magical realms.

From 2008 to present, he has been an associate artist of the The Arts Catalyst, a well-renowned arts and science agency in London. Here, he directs the KOSMICA series; an international programme of galactic gatherings for artists, space engineers, performers, astronomers, musicians and anyone interested in exploring and sharing space in original ways. Every session is different by bringing together a social mix of art–space programs including film screenings, exhibitions, performances and live concerts with a presentation, talk and debate about alternative and cultural uses of space. KOSMICA has spread into different countries like UK, France, Belgium, and Mexico and has presented over 100 artists and space professionals from all around the world.

Currently Nahum is directing the project called La Gravedad de los Asuntos that seeks to reflect on the concept of gravity and its wide range of meanings from different perspectives. This project is the first artistic zero gravity campaign that includes 9 leading Mexican artists that will perform a series of artistic and scientific experiments in parabolic flights during 2014.

Within the IAF, Nahum has been working at the The Committee for the Cultural Utilisations of Space (ITACCUS). Beyond advising and setting up the committee he has volunteered for the last 6 years to coordinate the committee’s activities. Likewise he has initiated various efforts to communicate to the wider public the activities of ITACCUS. Nahum has participated actively in various International Astronautical Congresses (Glasgow 2008, Prague 2010 and Naples 2012). Also he has been present in several Spring meetings at the IAF headquarters in Paris (2008, 2010, 2011, 2012 and 2013).