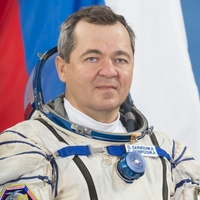 Date and Place of Birth

In 1993 he graduated from N.E. Bauman State Technical University (Bauman MSTU), specializing in Rocket Engineering and was qualified as a mechanical engineer.

Skripochka performed his first space flight at a period of October 8, 2010 to March 16, 2011 as the Soyuz TMA-01M flight engineer and the ISS Expedition 25/26 flight engineer together with Aleksandr Kaleri and Scott Kelly. During the flight he did three EVAs of total duration of 16 hours 39 minutes. The flight duration was 159 days 8 hours 43 minutes 5 seconds. His call sign was Ingul-2.

He performed his second space flight at a period of March 18 to September 7, 2016 as the Soyuz TMA-20M flight engineer and the ISS Expedition 47/48 flight engineer. During work of the ISS 47/48 crew, a lot of experiments as a part of the Russian science program were conducted (medicine, space biology, biotechnology, physical and chemical processes), about 50 of them were done by Oleg Skripochka and Aleksey Ovchinin. During the flight, the cosmonauts performed operations with Russian and foreign cargo vehicles, maintenance of the ISS onboard systems, onboard photo and video shooting, as well as they prepared their Soyuz TMA-20M spacecraft for re-entry. The flight duration was 172 days. Skripochka’s call sign was Burlak-2.

Skripochka performed his third space flight on September 25, 2019 as the Soyuz MS-15 commander together with flight engineer, NASA astronaut Jessica Meir, and VC-19 space flight participant Hazza Al Mansouri (UAE). After a four-orbit rendezvous with the ISS, the Soyuz docked to the station at 22:43 MSK. Soyuz MS-15 crewmembers transferred to the ISS on September 26, 2019 at 01:13 MSK. Call sign was Sarmat. On April 17, 2020 at 08:16 MSK, Soyuz MS-15 spacecraft with the crew onboard (Oleg Skripochka, Roscosmos; Andrew Morgan and Jessica Meir, NASA) landed successfully in the Kazakh steppe.