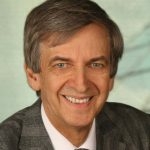 From 1 1980 – 1982 he was scientist at the Research Centre Graz and became involved in ESA’s first high-speed satellite data transmission experiment STELLA. In

1982 he joined Graz University of Technology where he became Assistant Professor and Deputy Head of the Institute of Communications and Wave Propagation, Austria’s leading institute in space communications. “Habilitation” was in 1993, afterwards Otto Koudelka became Associate Professor at TU Graz.

In 1990 he was Visiting Researcher at the Rutherford-Apleton Laboratory in Oxford and University of Buckingham carrying out research in high-speed satellite networking systems.

From 2002 to 2012 he was also Head of the Institute of Applied Systems Technology (Joanneum Research, the second largest non-university research institution in Austria), respectively Head of the Space and Acoustics Research Group, responsible for a team of more than 40 researchers and engineers.