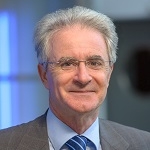 Paolo Ferri studied theoretical physics at the University of Pavia, Italy. He joined the European Space Agency in 1984, as visiting scientist in support of science operations for the EXOSAT X-ray astronomy satellite at the European Space Operations Centre (ESOC). He moved to the mission operations field in 1986, to work on the operations preparation of EURECA, the first ESA unmanned microgravity platform, which he supported throughout its flight operations until the retrieval from orbit by Space Shuttle Atlantis in 1993. He then was assigned to the CLUSTER mission, a fleet of four satellites for magnetosphere research, in his first assignment as Spacecraft Operations Manager. After the launcher failure in June 1996, exploded 37 seconds after lift-off, he started the preparation of the operations of the follow on mission., which was successfully launched in summer 2000.

In November 1996 he was nominated Spacecraft Operations Manager for the Rosetta mission, the first historical mission to rendezvous with and land on a comet nucleus. ESA had at that time very limited experience and no infrastructure for the operations of interplanetary missions. Together with a small group of engineers, Dr. Ferri specified all the elements of the ground infrastructure required for this type of operations. As operations responsible, he designed the operations concept and selected and built up the flight control team which had to accompany Rosetta on its 10 years journey to the comet. Thanks to the foundation work of the Rosetta team, within less than a decade ESOC had a fully functional and operationally validated infrastructure of hardware and software tools for the operations of interplanetary missions, and a group of engineers and technicians with a unique in-flight experience operating interplanetary missions, very successfully operating the three ESA missions, Rosetta, Mars Express and Venus Express.

After the launch of Rosetta in March 2004 Dr. Ferri continued to lead the flight operations until August 2006, when he was nominated head of the newly created Solar and Planetary Mission Operations Division, in charge of ground segment management, mission operations preparation and execution for all ESA solar and planetary science missions (at that time Rosetta, Mars Express, Venus Express, Ulysses, Smart-1 and Cluster in flight, BepiColombo in preparation). During his period as head of the Solar and Planetary Division more missions were approved for future launch, ExoMars and Solar Orbiter, and the preparation activities on the ground segment side were assigned to the Division’s responsibility. In the meantime he continued to support critical operations activities as Flight Director, e.g. for the launch (2005) and arrival at Venus (2006) of Venus Express, for the Rosetta Mars Swing-by (2007) and for the launch (2009) of the GOCE gravity mission of the Earth Observation programme. Since 2013 he is head of ESA’s Mission operations Department, in charge of mission operations preparation and execution for all ESA unmanned missions (currently 9 missions – 14 satellites – in flight and other 20 in preparation, mainly interplanetary, astronomy and Earth observation missions). The Department is also responsible for operation ESOC’s ground facilities, including the worldwide ground stations network.

Dr. Ferri is member ofthe Space Operations Committee ofthe International Astronautical Congress and has been supporting numerousIAC activitiessince 1999, initially as paper author,session chair, committee member and lecturer to students and young professionals. He devoted throughout his career constant attention to education and training in the field of operations. He developed several lectures on ground segment and mission operations, which are given regularly as part of various ESA internal and external training courses. His lectures on interplanetary mission operations have recently been included in a book on spacecraft operations. He also regularly supports specialist conferences like SpaceOps, and published numerous articles on specialised journals. His passion for space is combined with his interest in education and outreach. Thanks to the popularity of the Rosetta mission, which has been the project of his life and on which he has worked for the past 20 years, he has been lecturing to a large number of Universities, schools and general public audiences, bringing the subjects of space exploration and operations closer to a large audience of enthusiastic people of all ages. For the historical achievement of the Rosetta mission Dr. Ferri has been granted various awards, among which the Sir Arthur Clarke Award and the Galileo Medal of the City of Padova