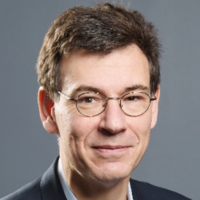 A scientist from the digital sphere, Philippe Baptiste is a specialist in algorithms, combinatorial optimization, operational research and artificial intelligence. During the course of his academic career he has been a researcher at the French national scientific research centre CNRS (1999) and IBM’s Watson Research Center (2000- 2001), and a lecturer at France’s prestigious Ecole Polytechnique engineering school (2002-2012). He is the author of several books and some 150 scientific publications and communications. He headed the Ecole Polytechnique’s information technology laboratory and created the Institute of Information Sciences and Interactions before being appointed Associate Director General in 2014 of CNRS, a key CNES partner. He also previously sat on the board of INRIA, the French national institute for research in computer science and control.

Alongside his academic career, Philippe Baptiste has also helped to found and develop several start-ups and pursued numerous collaborations with digital, aviation and defence manufacturers. He was Chief Scientific Officer and then Chief Technology Officer of Total (2016-2017) and a Partner and Director with Boston Consulting Group (2020).

From May 2017 to April 2019, he was chief of staff to Frédérique Vidal, the Minister for Higher Education, Research and Innovation, and in November 2019 advisor to the Prime Minister, Édouard Philippe. Throughout this period, he was in close touch with space policy.