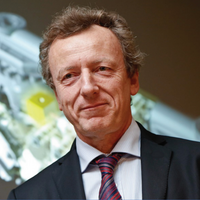 Roberto Battiston is the former President of the Italian Space Agency (ASI) and a member of CEPR, the governmental committee advising the Minister of Research and Universities.

He has worked for over 30 years in international collaborations in the field of experimental physics and fundamental interactions: Strong interactions, Electroweak interaction physics, Search for antimatter and dark matter in Cosmic Rays. He is also the founder of a research group in Perugia working in the field of frontier detectors and technologies to be used in fundamental physics research – ground based and space based. In 1994 he founded SERMS (Laboratory for the Study of the Effects of the Radiation on Special Materials), devoted to the characterization of materials and devices to be used in space conditions. He is also the Deputy spokesperson for the AMS experiment, the first fundamental physics experiment approved on the International Space Station, already successfully flown during the STS91 Shuttle flight in june 1998 and installed on the ISS in 2011.

Prof. Battiston is the Italian PI for the LIMADOU, to develop and energetic particle payload for the Chinese CSES satellite, and the Coordinator of the SR2S EU project (2013 – 15) to develop active shielding techniques for interplanetary flights. Author of more than 420 papers published on international scientific journals, and organizer of several workshops devoted to space science and to advanced technologies (Trento 1999, Elba 2002, Washington 2003, Bejijng 2006, CERN 2012).

He graduated at Scuola Normale of Pisa (1979) and possess a Doctorate (Troisième Cycle), University of Paris IX, Orsay, 1982. He has been the Chair of General Physics at the Engineering Faculty of the Perugia University, Faculty of Engineering, (1992 – 2012). He is now the Chair of General Physics at the Physics Department or the Trento University. He received a Laurea honoris causa from the Universtiy of Bucharest (2000)

Member of the Scientific Council of IRST (Trento) (1995).

Director of the Perugia INFN Section and member of the National INFN Directorate (2001-2008).