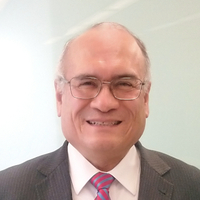 Academic training: Mechanical Electrical Engineer with a specialty in Telecommunications from the Faculty of Engineering of the National Autonomous University of Mexico (UNAM). He obtained a Master of Science (Electrical Engineering) degree from the University of Pennsylvania, USA. and the Doctorate in Engineering (Telecommunications) at UNAM, also with a specialty in Finance from the Faculty of Accounting and Administration of UNAM.

Pioneer of the space issue in our country, Dr. Landeros served in 1985 as Director of the National Satellite System, putting into orbit the start of operations of the first generation of Telecommunications satellites in Mexico, Los Morelos I and II, also having in charge of the Engineering Division, the Satellite Control Division (TTC), the Earth Stations Division, and the Commercial Division, leading a team of one hundred people.

With a broad academic career, he has been a visiting professor and member of the Department Council at the Polytechnic University of Madrid. At the UNAM Faculty of Engineering, he has served as a full-time professor in Telecommunications, coordinator of Special Projects and Engineering Tower; Secretary for Graduate Studies and Research, Head of the Graduate Studies Division; responsible for the Careers of Engineering in Telecommunications, Computing, and Electronic Electrical, with an academic experience of 40 years.

In the industry, he has served as general director of Telecommunications Project Consulting of TELSAT, SA de CV for large companies such as Petróleos Mexicanos, Federal Electricity Commission, Grupo Cifra, Comercial Mexicana, Banamex, Probursa, or Grupo ICA, as well as at Telefonos de México SA de CV. He was manager of the Satellite Network in the Telephone Development Department; he designed and put into operation the largest network of earth stations in the country; He was also a Project Engineer and directed the expansion and supply of the business.

He has received various recognitions, among others, from the Mexican Government for contributing to the Telecommunications of the Country; for the dedication and dedication in the professional training of the first generation of Telecommunications Engineers of the UNAM; and for participating in benefit activities for the AIUME Electromechanical Engineers union.

Likewise, he has obtained multiple distinctions, such as the Pan-American Order of Merit for Mechanical, Electrical, Industrial Engineering and related branches; National Engineering Award 2017 from the College of Electrical Mechanical Engineers; AIUME Award for Professional Excellence 2016; Recognition of INGENET; Winner in the VII Competition of the UPM Technology-Based Business Creation Program and Recognition of University Merit, among others.