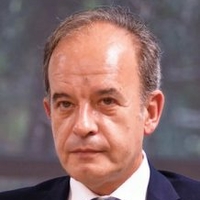 Born in 1961. Graduated in Civil Engineering (Hydraulic curriculum) at the University of Catania, Italy. PhD in Environmental Hydraulics at the University of Padua, Italy, in 1994. Professor of Agricultural Hydraulics and Land Conservation at the University Mediterranea of Reggio Calabria, Italy, since 2000 as associate and 2005 as full professor. Dean of the Faculty of Agriculture of the University Mediterranea of Reggio Calabria, for two triennial academic mandates from 2006 to 2012. General Director of the University Mediterranea of Reggio Calabria, from February 2013 to April 2017, and vice-Rector, from May 2017 to November 2018. Rector of the University Mediterranea of Reggio Calabria from November 2018, for a six-years academic mandate. Vice-President of the Permanent Conference of Deans of the Italian Faculties of Agriculture from 2008 to 2012. Member of the “National Commission for the Evaluation of Continuous Education” within the National Council of Agronomist and Forest Professionals, from 2010 to 2012. Member of Italian Association Idrotecnica, Italian Association of Agricultural Engineering, European Society for Soil Conservation, Italian National Hydraulic Group, European Society of Agricultural Engineers, American Society of Agricultural and Biological Engineers, International Association of Hydrological Sciences. Coordinator of several research programs at international, national and regional level. Coordinator of collaboration with Universities and Research Centers of United Kingdom (Silsoe College, Cranfield University, Bedfordshire, attended for several years since 1992 also as a fellow researcher; King’s College and Queen Mary’s University, London), United States of America (Department of Agriculture, Oxford, Mississippi and West Lafayette, Indiana), Belgium (Katholieke Universiteit, Leuven), Spain (CSIC, Còrdoba and Murcia, Universidades de Còrdoba y de Castilla -La Mancha, Albacete) and Brazil (Universidade Estadual Paulista, Sao Paulo, Botucatu). Author of about 200 papers published in conference proceedings, handbooks and thematic volumes, national and international journals, dealing with: hydrology and soil erosion, torrent control and evaluation of control works, agricultural use of wastewater and by-products of the agro-food industry, irrigation with urban waste water, management of collective irrigation systems, management of water resources in agriculture, silting of large artificial reservoirs and management of sediments. Invited speaker, chairman or member of the organizing and scientific committee in various national and international conferences. Referee for some international indexed journals, such as the Journal of Agricultural Engineering, Catena, Earth Surface Processes and Landforms, Agricultural Water Management, Transactions of the ASABE, Water Resources Management, Geomorphology.