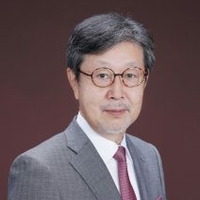 He received the B.S. degree of Aerospace Engineering in 1975, the M.S. degree of Structural Dynamics in 1977, and Doctoral degree of Engineering in 1981, all from Tokyo University. In 1981, he joined the National Aerospace Laboratory of Japan (NAL). In 1985, he seconded to the Science and Technology Agency of Government of Japan to support planning activity of Japan’s participation in the International Space Station program. In 2003, he was appointed as the Deputy Director for the Strategic Planning and Management Dept. of JAXA, on the merger of NAL, the National Space Development Agency of Japan (NASDA), and the Institute of Space and Astronautical Science (ISAS). In 2005, he was appointed as the Advisor to the HQ of R&D Directorate. He was also appointed as the Executive Secretary of the Local Organizing Committee of the International Astronautical Congress (IAC) 2005 Fukuoka, and contributed tremendously to the great success of the Congress. In 2006, he was seconded to the Visiting Professor of the Asian Institute of Technology, in Thailand. In 2009, He was appointed as the Director of the Innovative Technology Research Center of Research and Development Directorate, the Special Advisor to Director in 2012 and the Senior Advisor in 2017.

He was heavily involved the IAF related and International activities as follows;

the Award for Exquisite Research Activity from Minster of Science and Technology Agency in 2000 the Special Award for Research, Eco-Engineering Society in 2010 Fellow, Japan Association of International Commission of Agricultural and Biosystems Engineering in2014 IAA Section Award in 2017