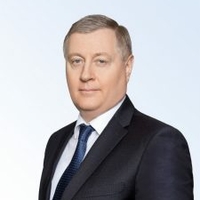 Mr. Saveliev was born in 1965 in Perm, Russia. He graduated as radioelectronic systems engineer from the Moscow Aviation Institute in 1989. He began his career as an engineer in the Automation Design Bureau (Dolgoprudny city, Moscow region) before becoming a senior expert of the International Science and Technology Cooperation Directorate of the Ministry of Science and Technology of the Russian Federation.

Between 1995 and 2001 he was a secretary of the Permanent Mission of the Russian Federation at UNESCO in Paris.

Mr. Saveliev then moved to the International Cooperation Department of the Ministry of Industry, Science and Trade of the Russian Federation, where he was a senior manager until 2004. In 2004, he became a secretary of the Russian Embassy in the United Kingdom.

He became a senior manager at CJSC “Sukhoi Civil Aviation” (2007-2008) before moving onto the post as Deputy Head of the Russian Federal Space Agency (ROSCOSMOS).

Moreover, under his leadership international activities of the State Space Corporation “Roscosmos” made progress in establishing mutual beneficial partnership with different foreign space agencies and enterprises.

During 2012-2014 he served as IAF Vice-President for International Organisations Relations and Developing Countries providing for International initiatives for safe and sustainable use of outer space, promoting space activities outcome appliance in different branches of economy.

Mr. Saveliev is a recipient of Order of Merit of the Russian Federation. He actively promotes international exchange and cooperation and is willing to make new contributions to the peaceful uses of outer space.