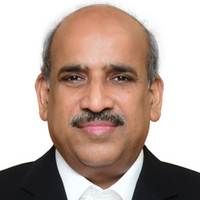 He took over as Director of U R Rao Satellite Centre (URSC), the lead Centre in the country for design, development and realisation of all satellites of ISRO, on June 01,2021. He is currently leading satellite fraternity to realise various types of satellites to meet the national requirements in the areas like communication, navigation, remote sensing, meteorology and inter-planetary exploration.

Before taking over as Director, URSC he was functioning as Deputy Director for Communication and Power Systems Area in URSC and spearheading the developments. During his 35 years of experience in URSC / ISRO, he has contributed primarily in the areas of Solar arrays, Power systems, Satellite Positioning System and RF communication systems for Low Earth Orbit(LEO) Satellites, Geostationary Satellites, Navigation Satellites and Outer Space Missions like Chandrayaan, Mars Orbiter Mission (MOM) and others.

He was instrumental in successful realisation of the 70V bus for the ISRO satellites, unique design for power generation and distribution systems for the interplanetary mission like Chandrayaan-1 & 2, Mars Orbiter Mission, Astrosat, etc. He has fostered the industries in the country for fabrication and testing of solar panels, battery systems, etc.

Among his works in the recent years, he is leading the efforts towards to miniaturisation of avionics systems, indigenisation of Electronics & power system components, micro/mini satellite bus development, etc. He is also spearheading the avionics system design, realisation and qualification for the Gaganyaan Programme.

He joined the ISRO Satellite Centre (ISAC), currently known as URSC after obtaining his Master's degree in Physics from Bharathidasan University, Tiruchirappalli in 1986.

He has been awarded ISRO's Performance Excellence Award for the Year 2017 and ISRO Team Excellence awards in 2017 and 2018. He has about 50 publications to his credit in Peer Reviewed Journals and International conferences.