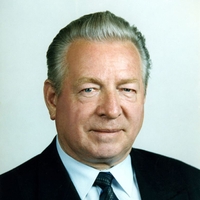 Konyukhov is one of the talented followers of M.K. Yangel and V.F. Utkin who passed a great school of developing, designing, development and flight testing of missile and space rocket systems. He made significant contribution in the development and building of several generations of strategic missile systems, launch vehicles and spacecraft created in Yuzhnoye SDO, including one of the most powerful and effective liquid-propellant strategic missiles R36M (SS-18), solid-propellant missile RT23 (SS-24) of silo and railroad basing mode. He justified and developed the principles of developing, designing and development testing of pop-up launch scheme for liquid-propellant heavy missiles, which considerably improved the performance of missile systems put in Strategic Missile Forces service. He supervised the works on designer’s supervision and considerable prolongation of guaranteed service life of R36M (SS-18) missile being in the Russian Army inventory.

Stanislav Nikolayevich Konyukhov gave much consideration to training of engineering and scientific manpower. He held a Chair of System Design at the Institute of Professional Development of the USSR Ministry of General Machine – Building (1987-1992), Chair of Flying Vehicles Designing at Kharkov Aviation Institute (1995). A Chief Editor of industry scientific – technical collection (1991), a member of Specialized Board of Dniepropetrovsk National University for dissertations defense (1988), a member of Experts Board of Supreme Certification Commission of Ukraine (1992), a member of Section of Interindustry Scientific-Technical Council for Space Research of Russian Academy of Sciences.