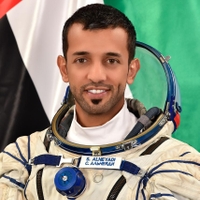 Sultan AlNeyadi is an Emirati astronaut, who was the back-up for Hazzaa AlMansoori, in the UAE’s first scientific mission to the International Space Station (ISS), on 25 September 2019, under the slogan ‘Zayed’s Ambition’.

In preparation for the mission, AlNeyadi began his training on 3 September 2018, at the Yuri Gagarin Cosmonaut Training Centre at Star City in Moscow, based on an agreement with Roscosmos. He also received training in Houston in Texas, and Cologne in Germany, as part of partnership agreements with major space agencies, including NASA, ESA, and JAXA.

The training programme, prepared specifically for the 25 September mission, included various topics. These included training on AlNeyadi’s scientific mission, briefing him through comprehensive training on all sections and units of the ISS and how to use its devices and equipment, emergency fire drills, dealing with low pressure and ammonia leak inside the station, in addition to survival training if the capsule had to land in a cold forest. AlNeyadi was also trained on the spacesuit, weighing up to 10 kgs and how to wear at zero gravity.

AlNeyadi was also trained to perform daily tasks such as preparing food, how to use the camera to document events, taking pictures of the Earth, communicating with the ground stations, and other day-to-day tasks during the mission. AlNeyadi underwent more than 90 courses, with the total number of training hours exceeding 1,400 hours.

AlNeyadi is one of the two selected astronauts in the UAE Astronaut Programme, launched by His Highness Sheikh Mohammed bin Rashid Al Maktoum, Vice President and Prime Minister of the UAE and Ruler of Dubai, and His Highness Sheikh Mohammed bin Zayed Al Nahyan, Crown Prince of Abu Dhabi and Deputy Supreme Commander of the UAE Armed forces, in 2017. The Programme aims to train and prepare a team of Emirati astronauts and send them to space for various scientific missions.

AlNeyadi was selected from over 4,000 more candidates, following a series of mental and physical tests in the UAE and abroad. He is a holder of a PHD in Information Technology (Data Leak age Prevention) and practices Jujitsu, which helped him to be ahead of other candidates and successfully pass the UAE Astronaut Programme’s tests, as he shared the high mental abilities and fitness required. As part of the agreement between the Mohammed bin Rashid Space Centre (MBRSC) and the Russian space agency Roscosmos to train Emirati astronauts,

AlNeyadi travelled to Russia in September 2018 to receive the necessary training for the 25 September mission.

AlNeyadi was born on May 23, 1981, in Umm Ghafa, 30 kilometers southeast of Al Ain, in Abu Dhabi, where he received primary and secondary education. He excelled in his education, following his father’s footsteps, who served in the military. AlNeyadi joined the armed forces and was assigned to study Communications Engineering. He began his higher education in the UK, and received a bachelor’s degree of Science in Electronics and Communications Engineering from the University of Brighton in the UK. He returned to the UAE and began serving for the Armed Forces. He later resumed to his passion for education by heading to Australia to receive his Master’s degree in IT, from Griffith University in Australia, in 2008. AlNeyadi worked as Network Security Engineer for the UAE Armed Forces, and visited more than 20 countries around the world. At the beginning of 2012, he returned to Australia for five years, where he earned a PHD in Information Technology (Data Leak age Prevention) and published six research papers in international websites.