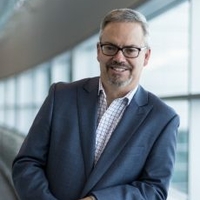 Sylvain Laporte became President of the Canadian Space Agency in March 2015. He is committed to advancing Canada’s presence in space through the satellite, exploration and astronaut missions in the service of science and innovation.

From 2011 to 2015 Sylvain was Chief Executive Officer of the Canadian Intellectual Property Office. Prior to this, he held the position of Executive Director, Industrial Technologies Office at Industry Canada, where he was responsible for managing financial contribution programs in research and development for the aerospace, defence, security and space industries. Sylvain first joined Industry Canada in March 2007 as the Chief Informatics Officer.

Before joining the public service, Sylvain held several positions at the Canada Post Corporation in the marketing, retail, logistics and information technology sectors.

Sylvain is passionate about leveraging space to inspire Canadian youth to pursue careers in science, technology, engineering and mathematics.

Sylvain is a certified sommelier. He is married, has three children and has embarked with great enthusiasm in his new role of grandfather.