Appointed at the Sandra Day O Connor College of Law, Arizona State University • Assistant Professor, School for the Future of Innovation in Society 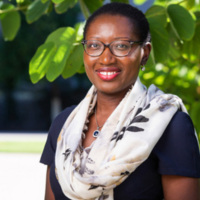 Dr Timiebi Aganaba-Jeanty is currently a post-doctoral fellow at the Centre for International Governance Innovation (CIGI), Waterloo, Canada, looking at the intersection of policy and technology tools in support of the implementation of international law. She is currently focused on the potential of blockchain technology to address reporting under the Paris Agreement on Climate Change and the evolution of satellite systems to support national greenhouse gas emissions inventory’s.

Timiebi is Associate Chair, Space Policy, Economics and Law at International Space University Space Studies Program and has guest lectured at the Faculty of Law, University of Sherbrooke, Quebec, Canada and the African Regional Centre for Space Science and Technology Education in Nigeria. Timiebi was previously the Executive Director of the World Space Week Association, coordinating the global response to the UN-declared World Space Week. In 2016, there were over 2700 World Space Week events registered in 86 countries. In this this role, she became a member of the Student Education and Outreach Committee of the International Astronautic Federation (IAF). Since 2008, she has presented papers at 4 IAF International Astronautic Congress (IAC) sessions on a variety of issues, primarily on the African Space Policy and other legal and policy issues affecting emerging and aspirant space nations. She will be presenting at the 2017 IAC on “Looking at a global plan to monitor emissions using satellite technology: institutions and cooperation mechanisms.” She has also acted as rapporteur at IAC for the Sessions of the International Institute of Space Law.

Formerly a lawyer at the Nigerian Space Agency, Timiebi was a member of the Nigerian delegation to the Legal Subcommittee of the United Nations COPUOS in 2011, and was nominated by the United Nations Office of Outer Space Affairs to represent Africa in its 50th year celebration of women in space, based in part on initiatives she supported in Africa including the establishment of the African Regional Rounds of the IISL Manfred Lachs Space Law Moot Competition and the NASA Space Apps challenge in Nigeria. Timiebi also represented Nigeria as the Next Generation Aviation Professional at the International Civil Aviation Organization in celebration of 70 years of the Chicago Convention. From 2012-2016, Timiebi was a Consultant at Euroconsult, a leading global space consulting firm, where she led the socio-aspects of Impact Assessment studies of the Canadian Space Sector, Led a pipeline of commercialization studies on technology transfer for the Canadian Space Agency, and contributed to reports on Emerging space nations, Earth Observations, and Government Space Markets.

Previously the Director’s Assistant at the International Institute of Space Commerce, Timiebi is a member of the technical advisory team on the board of the New York Center for Space Entrepreneurship and was. As well as PhD, She has an LLM Law (McGill, Canada) MSc in Space Management (ISU, France), BL Nigerian Law School, LLB Law (UK). A recipient of several academic and professional awards, in celebration of International Women`s Day 2016, Timiebi was recognized by a Canadian cultural organization as one of 16 women for “significant contribution to Quebec society” including for her work on the board of the Amal Women’s Centre, a Montreal based non for profit supporting women suffering from domestic violence abuse.

Timiebi would like to thank the World Space Week Association and the IAF for nominating and awarding her with this prestigious honor, and for the support she has received from mentors. She hopes to encourage all young people that it is not where you start that matters but where you are going and who you help lift up along the way.