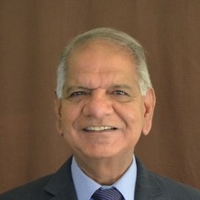 Dr. Jha’s technical contributions in Canadian Space Program as well as in International Space activities have been significant. His initiatives in forging international partnerships led to CSA’s cooperation with India in the form of Astrosat, with NASA on Cloudsat, with Argentina on SAC-D and SAOCOM project. His leadership and commitment to the profession is reflected by his recognition and active participation in many groups, committees and advisory boards. Some of his specific awards are; Queen’s Jubilee Medal recipient in 2002 (this Medal is given to a few selected Canadians who have made a significant contributions to Canada), honorary member of the “Golden Key – International Honorary Society” since 2001(this society promotes academic excellence amongst universities in North America); recipient of the Canadian Aeronautics and Space Institute (CASI)’s “Alouette Award” for 1999 (this award is given each year to one person who has made a very significant contribution to the Canadian Space Program), appointed full member of the International Academy of Astronautics(IAA) in 2004, and the recipient of the Professional Man of the Year award in 2004 from the Indo Canadian Chamber of Commerce. Some of the specific committee memberships are; Co-Chair of “International Program Committee” (IPC) in 2003-2004 and in 2013-2014, Vice President of International Astronautical Federation (IAF) from 2004 to 2008, Canadian representative on the Independent Assessment Panel for the International Space Station (1994-1999). Canadian delegate to the European Space Agency Council (1996-2006), Canadian representative for the Committee for Earth Observing Satellites (CEOS) (1997-2006), Canadian representative for Group on Earth Observation (GEO) (2003-2007) . Dr. Jha has published and presented more than twenty papers on space related subjects. Dr. Jha has also served as a Board member for five technology related non for profit organizations.