The IAF GNF Space Conversation Series is ready to kick-off!

Don't miss the opportunity to attend the first ever IAF GNF Space Conversation Series on the Supplement Issue of the Global Exploration Roadmap, issued in August 2020! 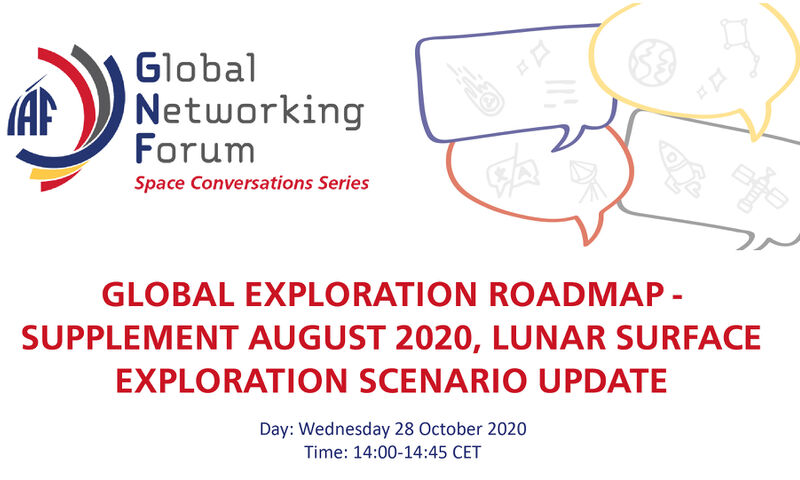 We are excited to announce that the first IAF GNF Space Conversations Series on the topic of “ Global Exploration Roadmap - Supplement August 2020, Lunar Surface Exploration Scenario Update ” is organized by the Japan Aerospace Exploration Agency (JAXA), and will be taking place on Wednesday 28 October at 14:00 CET!

On behalf of the International Space Exploration Coordination Group (ISECG), Mr. Sato will present the Supplement issue of the Global Exploration Roadmap (GER), and discuss how the space agencies are going to implement the scenario and the architecture described. The GER Supplement issued in August 2020 describes the latest mission scenario and architecture for human and robotic lunar surface missions and preparatory activities for Mars, and integrates renewed and emerging national plans and commercial capabilities among ISECG participating countries. First, the common sets of objectives for human lunar surface exploration have been coordinated and summarized into 12 objectives with rationale and performance measure target. Second, the architecture and campaign sequence, to realize the objectives, have been studied and coordinated into one scenario. As a result, the ISECG came to the conclusion to have three phases approach, which are:

Mark it in your calendar and make sure to join us!